MUSIC REVIEW OF THE DAY: AMANDA JACKSON BAND - FIRE IN THE BLUE 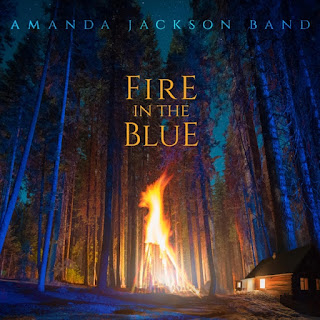 Driving home from P.E.I. today had me thinking about how much I admire the Island's music scene, which then reminded me I was due to talk about one of the bright lights of the scene there. The Amanda Jackson Band released its first studio album this year, but the group has a rich history thanks to its members. Both Jackson and guitar player Dale McKie came out of the blues group Bad Habits. Todd MacLean is one of the Island's most sought-after instrumentalists, on piano, sax and guitar. Both Jon Rehder and Reg Ballagh have decades of experience on bass and drums respectively, playing with many of P.E.I.'s best.

Jackson's rich and emotive voice is going to stand out in any setting, and wisely the band lets her shine. But it's not without surprises. A natural at belting blues, all those talented players behind her instead turn the music into something more subtle and jazzy, and very effective. There's an acoustic/organic feel to the original songs, with acoustic guitar. electric piano, guest violin from Sean Kemp, and harmonica from McKie among the colours. Mind you, when they do the blues, the power is unleashed. MacLean plays a masterful solo on Human Zoo, and there's a mighty groove worked up in Before The Night Is Through. The lone cover, Tower of Song by one L. Cohen, is a dramatically rearranged version, Jackson in full vocal flight.

Social concerns are a big part of the band's lyrics and obviously they put their talents to use that way as well. Islanders can find them Friday night, Dec. 22, in Charlottetown at the Florence Simmons Performance Hall, as part of the Food and Warmth Show 2017, proceeds going to The Upper Room, P.E.I.'s central food bank and soup kitchen.
Posted by Bob Mersereau at 10:57 PM