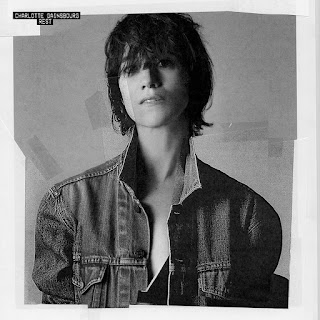 Airy, dramatic Europop from the daughter of Serge Gainsbourg and Jane Birkin, her first new music since 2010's IRM, a compelling release inspired by her cerebral hemorrhage. Clearly she likes a big subject in her lyrics, as this one tackles topics such as the legacy of her controversial father, alcoholism, and the death of her sister Kate Barry, who also had a tumultuous life.

Sung equally in French and English, often both in a track, and it's a surprisingly seamless mix, although part of that is because with all the processing on her voice, it's hard to make out which language she's using. Not auto-tuning, mind you, this is production stuff, an overall electro sound by producer SebastiAn, with a little '90's retro (think Madonna) mixed with tomorrow's sound today. No doubt that appealed to Paul McCartney, known to like some electronic stuff himself, who shows up as writer and player on Songbird In A Cage, where he contributes guitar, bass and drums to the slinky track.

There's another effective song called Sylvia Says, where Gainsbourg mixes in some lines of Sylvia Plath's poetry. While Plath's no stranger to pop star tributes, this one's a novel approach, bringing Plath into a contemporary world. Canada's Owen Pallett shows up in his usual role of string and horn arranger and conductor, another element that gives the album a much broader sound than the usual programmed pop work.
Posted by Bob Mersereau at 9:18 PM