MUSIC REVIEW OF THE DAY: THE RAMONES - ROCKET TO RUSSIA (40th Anniversary Edition) 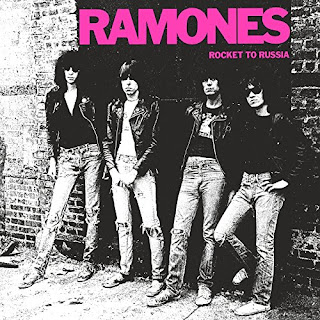 The Ramones' third album, and second of 1977, is my favourite, where everything peaked, from song writing to ideas to production. After the modest success of the group's first two albums, and seeing they took recording seriously, the budget was increased for this album, and it sounds like it. There's nothing messy about it, the guitars have guts, the drums pound, there's a distinct bottom end and the vocals and harmonies stand out. This was The Ramones' response to British punk, that their music was good, not a joke.

That said, there was humour, either goofy or black, the latter found in We're A Happy Family. And when it was silly it was edgy, as in Teenage Lobotomy, which includes the immortal line, "Now I guess I'll have to tell 'em/That I got no cerebellum." The group was celebrating its growing fan club too, with songs like Sheena Is A Punk Rocker and Cretin Hop, creating a mythology that would stay with the scene throughout the group's long career.

Rocket To Russia features a non-stop run of great songs, 14 of them, all under three minutes. You get the brilliant East Coast Beach Boys number, Rockaway Beach, as well as covers of Surfin' Bird and Do You Wanna Dance? that show that punk had been around in the '60's too. The band's best-ever ballad was included, Here Today, Gone Tomorrow, as well as underrated cuts such as Ramona and I Don't Care. All other Ramones albums have at least a couple of filler cuts, but this one doesn't let up.

The reissue series for the 40th anniversary editions include single-disc original versions, as well as bigger boxes for bigger fans. The deluxe version has 3 discs as well as a vinyl copy of the original, including a couple of dozen outtakes and such, and a concert recording from Glasgow in 1977.
Posted by Bob Mersereau at 5:36 PM