MUSIC REVIEW OF THE DAY: SQUEEZE - THE KNOWLEDGE 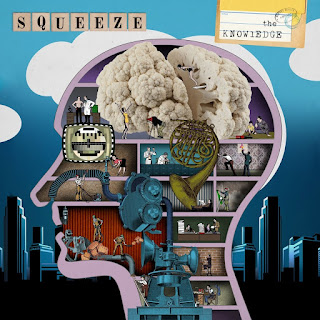 Such is the goodwill Squeeze earned in the New Wave days, they continue to be welcomed warmly with each new tour and album these days. Called the Lennon and McCartney of their generation, it's really just Chris Difford and Glenn Tilbrook and whatever band they put together these days, but they do always surround themselves with strong players and contributors, notably keyboard player Stephen Large, who adds lots of colourful parts to Tilbrook's flights of pop fancy.


The most endearing and enduring Squeeze songs remain the big, hook-filled hits, from Tempted to Hourglass to Annie Get Your Gun, but the duo has stretched over the years into more eclectic compositions, from their "solo" disc Difford and Tilbrook in the mid-'80's on. It's almost like Difford especially (the music guy) finds it a little dull to go for insanely catchy songs each time, and instead gets whimsical. He thinks nothing of a doing a disco tune with an opera singer's part and a children's chorus, as we hear on Rough Ride. These tunes are still melodically wonderful and complex, captivating productions though, so we have no choice but to follow him down the rabbit hole on each one.

Almost as an aside, the group throws in some more easily digested numbers, such as Please Be Upstanding, where the title becomes this epic singalong, and Albatross, with its sly reference to Peter Green's Fleetwood Mac at the end. As a recent live streaming concert revealed, the band still performs all the hits, but they mix in lots of the new material too, as always daring us to dig a little deeper into the more sophisticated numbers, and it's a rewarding challenge when you do.
Posted by Bob Mersereau at 9:43 AM