MUSIC REVIEW OF THE DAY: NEIL YOUNG + PROMISE OF THE REAL - THE VISITOR 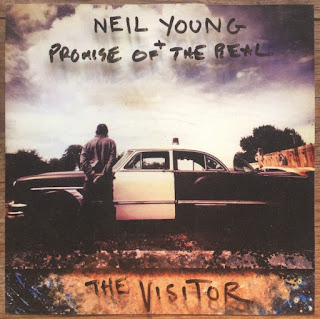 In case you hadn't noticed, Promise of the Real is turning into a first-rate backing group for Neil Young, now that the beloved Crazy Horse seems no more. That's sacrilege I suppose for classic Neil fans, and I've bemoaned many of his weaker albums of the past couple of decades. But so far, the albums with the group, The Monsanto Years and the doctored live release Earth, plus this latest, have a different and inspired approach, which actually helps Young present his often-awkward political and protest songs in a much more enjoyable way.

When Young is trying to write topical material, it's often so simplistic and obvious, even the choir he's preaching to rolls their eyes. Think about the cringe-worthy rants on the environmental fable Greendale, or the feeble fist-shaking of the Living With War album, railing against Bush Jr.

Or maybe it's just us that have changed, now that it's so freaking obvious there's a psycho in the White House and a whole bunch of vicious men pulling all the strings. Anyway, the songs here are going down much easier, and I give a lot of credit to the less-dogmatic sounds Promise of the Real bring to the table, it seems much more of a collaborative effort, and not the rigid "This is Neil's Sound" presentation. They are a looser bunch, Tato Melgar's percussion adds a Latin feel, and they move easily from rock to blues to acoustic tunes, while never repeating classic Neil approaches.

Opener Already Great proves a few of my above points, and it's also a better-written song than anything on Living With War, reminding Americans "You're already great, you're the promised land," while capping it off with "No wall, no hate, no fascist USA." He even remembers to deflate the obvious criticism by starting the song "I'm Canadian, by the way/And I love the USA." The cut Almost Always is even subtle and thoughtful, Young singing "I'm livin' with a game show host who has to brag and has to boast/'Bout tearin' down the things that I hold dear." That's actual good lyric writing, something that can be the least of Young's concerns at times. When Bad Got Good is brief, and to the point, and kind of funny: "No belief in the Liar-in-Chief/Lock him up." Only when he gets one of his ideas about bringing in a big choir and orchestra, on Children of Destiny, does Young return to the overblown and bland protest, the dozens of people joining him for cliches such as "Stand up for what you believe/Resist the powers that be."

Another smart move is that the protest and political work is spread out, separated by several regular tunes, so we're not feeling beaten over the head. Again, there is lots of variety, from the mystical dream trip Carnival, Sugar Mountain all grown up and voodoo-trippy. Diggin' A Hole is a good, old rockin' blues by the group, down and dirty and mindless. Closer Forever is going to need some studying. It's a lovely semi-acoustic work, lengthy, with lots of references to previous Young works, including the galleons of war from Cortez the Killer. The big line is "Earth is like a church without a preacher," and I think it may hold a clue to Young's philosophy. I'll get back to you on that. Meantime, I'm pretty positive about this album, and in general the last few years of Young's production.
Posted by Bob Mersereau at 9:43 AM