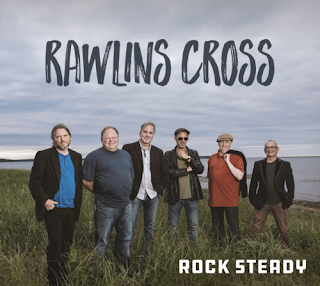 The title cut has the group's classic uptempo sound, in the Reel 'n' Roll style, the big driving beat, and Joey Kitson's booming bass vocals, which feels just like your favourite pub on a Saturday night. They slow it down for Long Have We Travelled, and the bagpipes appear, stirring in this big ballad. There's a departure on the tune Can't Get You Out Of Mind, a deep funky blues with, get this, a solo on the pipes thrown in. Find that anywhere else. Accordion, mandolin and tin whistle combine for the warm closing number, Waltzing The Time Away. When you hear a Rawlins Cross song, you can be in no other place than Atlantic Canada.
Posted by Bob Mersereau at 10:50 AM