MUSIC REVIEW OF THE DAY: U2 - SONGS OF EXPERIENCE 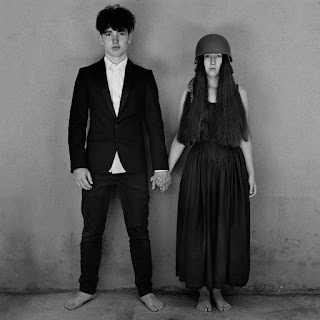 U2's plans for continued world domination were rudely disrupted with the backlash over the band's gift of its 2014 album Songs of Innocence directly to everybody's iTunes account. After years of planning a two-album concept, starting and stopping various iterations of the music with various producers, and finally getting the plan solidified, the one gesture they probably thought was a brilliant coup turned into a marketing disaster, at least in p.r. terms. They are still stuck with talking about it, three years later with the release of this new set.

This is the second part of the plan, which initially would have followed Songs of Innocence much sooner. That first album was about looking back to the start of the band's career in Ireland, and featured lots of big, arena-sized songs, whereas this one focuses on the present, a mature band more reflective. Bono has stated most of the songs are letters to various people in his life, either individuals such as family and friends, to groups such as fans. In typical U2 fashion one delay, trying to get the iTunes backlash behind them, turned into several, as the songs were rewritten, the production changed, decisions questioned, and the band worried that it wasn't the best they could do. This seems to go on with every U2 album, and it can't be healthy. Anyway, apparently the biggest issue was the right-wing turn the world took with Brexit and Trump, etc., and Bono feeling the need to address it in some way.

The political situation does not figure large here, there are some broader lines that address the general distress, and the cut American Soul is certainly directed at the U.S. in a loving way. But more so these are largely personal statements with admissions and fondness, one assuming a song such as You're The Best Thing About Me would be about his spouse with lines like "I'm the kind of trouble that you enjoy." It's interesting to hear Bono address his public persona and personality flaws, which were partly behind the backlash: "I have everything but I feel like nothing at all/There's no risky thing for a man determined to fall." I'm not sure I believe that sentiment, given his determination to succeed and become bigger, better and more important in the world, but at least that's his own interpretation.

So that's what it's about and what lead to the album. As for the end result, it's certainly a less bombastic affair than the last, and the usual U2 music. I like the reflective tone, yet it does that by limiting the power the group can conjure. With eight different producers involved, and as many as five on one track, these songs have been beaten into submission rather than finely crafted. At one point the band went back in to rework everything to get a unified sound, and again, that seems like trying to add a plot after the book's been written. It's just all too similar in the end. It's U2 in With or Without You mode, over the entire album. For an album about life's experiences, we need a little more life.
Posted by Bob Mersereau at 10:33 PM