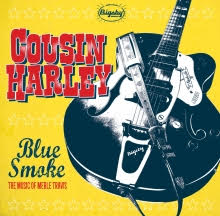 Because we focus so much on the rock and roll heroes, or the great jazz players of earlier in the 20th century, Merle Travis has been neglected, quite unfairly. Not only was he a guitar innovator and master player in the country/Western Swing world, he was a tremendous songwriter as well. Take his classics, 16 Tons and Dark As A Dungeon, certainly two of the masterpieces of the recording era, and that's just the tip of the iceberg.

B.C. band Cousin Harley does a fantastic job celebrating the master on this 12-song set. Lead by a guitar whiz themselves, Paul Pigat, the group edges the Travis songs a bit further into the rockabilly territory, but there's nothing wrong with that, for sure, as folks such as Johnny Cash and Carl Perkins sure admired Travis. In fact, his fingerpicking style certainly inspired the rockabilly pace. The band keeps lots of the humour Travis was known for as well, doing justice to the tongue-in-cheek numbers Divorce Me C.O.D., So Round, So Firm, So Fully Packed, and Smoke Smoke Smoke That Cigarette.

Pigat has a friendly, old-timey voice that's perfect for this material, and transports us back to the '40's and '50's with ease. Wisely the group is happy to show just how fun and solid the songs are without resorting to anything modern and fancy, just great playing does the trick. Pigat's guitar certainly stands out throughout, handling Travis' singular mix of country, Western Swing, jazz, blues and boogie-woogie. He tops it off with his own tribute to the Travis style, an instrumental called Rosewood, that the master himself would no doubt admire.
Posted by Bob Mersereau at 8:49 PM