MUSIC REVIEW OF THE DAY: CHRIS STAPLETON - FROM A ROOM: VOL. 2 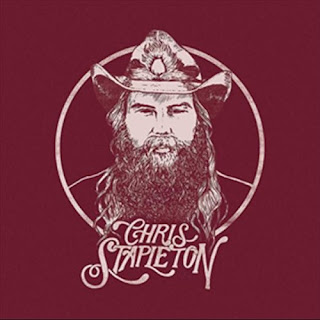 Fans of quality country have been drooling over Stapleton, from his hit debut album Traveller, and from the first volume of this back-to-basics set released this past spring. Basics here means no fancy-ass programming or auto-fixing or whatever, just a small group making outlaw country in an old school studio. Nashville's RCA Studio A was founded by Chet Atkins and Owen Bradley, and Stapleton has the stuff to do the room justice.

Volume one was the eye-opener, nine cuts that recalled Waylon and Willie at their '70's finest, coming in under 40 minutes. That's the same program here, the same length, but a little more variety in tempo at least. Stapleton moves from raging rock (Midnight Train To Memphis) to introspective ballad (A Simple Song), all delivered with hardcore troubadour twang, in both vocals and lead guitar. He hurts and he rages, but there's no bullshit let's party music, aimed at entertaining the shooters-in-the-bar crowd. Here, liquor is treated realistically, like it was in the '60's: "I wish that I could go to church but I'm too ashamed of me/I hate the fact it takes a bottle to get me on my knees," he sings in Drunkard's Prayer. There are an awful lot of songwriters in Nashville that need to sit down and have a long talk with this guy.
Posted by Bob Mersereau at 9:31 AM