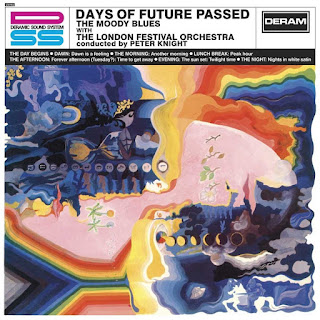 At the beginning of 1967, The Moody Blues had a problem. They sucked. After an initial 1965 hit in England and North America, Go Now, the British R'n'B group had failed to follow it up, and plainly weren't that good. They didn't have the tough stuff that the Stones, Animals and Yardbirds did to seem legitimate in the bluesy world, or even the pop scene. The only one who did, Denny Laine, had fled, not to be heard of until he resurfaced in Wings in the '70's.

The remaining members drafted in a couple of fellows who could write and sing, Justin Hayward and John Lodge on guitar and bass, and started searching for a new direction. A couple of important things happened. Keyboard geek Mike Pinder got a fancy Mellotron, a synth precursor that played tape loops to spacey effect, emulating strings and such (think Strawberry Fields Forever). And their record label asked them if they could do a rock version of a classical piece, with actual strings, to help promote the growing interest in stereo sound. Hayward and Lodge had been coming up with some possibilities, and since it was the Summer of Love and psychedelia and Sgt. Pepper and all that, experimentation was in the air.

Days Of Future Passed is often credited as a blueprint for prog, but on closer inspection, it's actually more of a very well-conceived mix of orchestra and pop group. The orchestral sections were recorded separately, with no group members playing (except on one song), and were used to open and close and link, as well as backing for a couple of poems. Then the rock songs would come in, and the Mellotron handled the string-like parts. For the most part the arrangements were quite interesting, and the opening The Day Begins foreshadows Nights In White Satin to great effect. Sometimes the strings do sound a little too faux-dramatic, but there are also some seamless transitions from orchestra to band that make this such a successful work.

The concept was even pretty good, given the flaky times. The title was made up by some record company person, but even it sounds okay, as the idea here is a set of songs that follow a day. It starts at sunrise, hits afternoon with the hit Tuesday Afternoon, and ends at night with Nights In White Satin. It was such a hit that it stayed on the charts from late '67 until 1972, when a reissue of Nights in the U.S., spurred on by constant FM radio play, made it all the way to #2 (#1 in Canada).

The remaining Moodies (Hayward, Lodge, drummer Graeme Edge) have been touring the album this year for its 50th, with a PBS special, and here we get the deluxe CD/DVD audio version of the original album. They've really done the set up well. Disc one features the original mix of the album on CD for the first time. In the '70's it had been remixed due to some damage on the original master, and all subsequent pressings used that. Now the technology is available to fix that old problem, so we get the 1967 version again, which has quite a few differences. Disc two features the '70's remix, and it's actually fun to spot the differences, including missing backing vocals and alternated orchestral fades and such. There are a plethora of bonus cuts, including some singles and b-sides issued around that time, but never on albums, and definitely not hits. They show the group changing as Hayward and Lodge start to put in their contributions. The always-welcome BBC sessions feature some of the album cuts, including Nights In White Satin, on their own without orchestra, and they do hold up well. Clearly the band was on to something good with this new lineup and direction. There are alternate versions of several album cuts, including The Sun Set, without its orchestra. On the accompanying DVD, we get 5.1 surround and superior stereo mixes, plus some rare footage from French television of the group doing live performances of Peak Hour, Tuesday Afternoon and Nights In White Satin.
Posted by Bob Mersereau at 2:09 PM