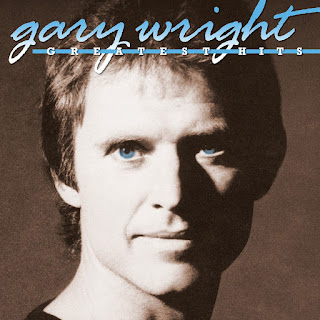 I am unduly attracted to the failed single releases of once-popular artists. When a performer has a big hit, and then quickly falls off the charts, I like to get those singles and hear if they are actually any good, and it was just a case of a fickle public or bad promotion. This may be why you will find 45 RPM copies of Edison Lighthouse's It's Up To You Petula and Find Mr. Zebedee, alongside Love Grows (Where My Rosemary Goes). FYI: They weren't good.

Now, for about three months in 1975/76, you couldn't get much bigger than Gary Wright. Dream Weaver and it's follow-up, Love Is Alive, were both huge hits for the keyboard king, featuring his synth talents (oh that synth bass) and space-y sound effects. Dream Weaver even had a second life as a kitsch classic, featured prominently in the Wayne's World movie. But then, crickets. So I analytically approached this set to find out if the next batch of singles were to blame.

Wright was no spring chicken, and some fans knew him from his days with the British band Spooky Tooth, or his session work, most prominently on his friend George Harrison's All Things Must Pass. Then he bought all this fancy new keyboard tech and came up with a sound. A lot of it sounds dated now, especially that bass, and the swoops, and probably people got pretty sick of it after his '76 burst of fame. The first single of his next album in '76, Phantom Writer, couldn't even find the Top 40, and I can't even remember hearing it on radio, something I paid pretty close attention to back then. That began a run of releases and a couple of disappointing albums that must have baffled all involved. The songs couldn't even get into the Top 100.

Then, a shift happened, mostly thanks to some better songwriting. You can hear it on cuts such as Starry Eyed, which had a much better funky keyboard, in the Stevie Wonder style. Finally in 1981, the gods of radio let him have one last gasp at the charts, a good song called Really Wanna Know You which hit #16. That was it though, Wright's album-selling power was gone. To cap this collection, there's the remake Wright dead for the Wayne's World soundtrack, a pretty close copy with the main difference being a change in the opening line from "I've just closed my eyes again," to "I HAVE just closed...," contractions apparently no longer available.

So, the collection starts big, then drops really quickly, then picks back up at the end for a respectable conclusion. You're not missing a whole lot after the Big Two hits, but if you need 'em, there's a few okay tracks here to add to the collection.
Posted by Bob Mersereau at 9:58 PM