MUSIC REVIEW OF THE DAY: THE ASSOCIATION - LIVE 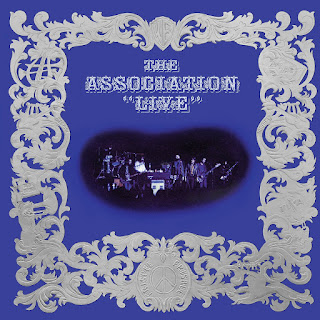 The Association are best known for a string of late '60's hits that barely qualify for soft rock, including Cherish, Windy, Along Comes Mary and Never My Love, the last one the second-most played record on radio in the 20th century. They probably deserve a little better legacy, and the group does have fans from the Sunshine Pop genre. They were an excellent vocal group, and the production was always tremendous, if lightweight. It turns out the members had tons of chops as well, as this live set from 1970 shows, just reissued for the first time on CD.

They were a self-contained touring band, all seven members instrumentalists as well as singers, providing their own horns and wind instruments, lots of percussion, as well as a solid keys-bass-drums-guitar core. While the hits provided the highlights, and set pieces such as the chorale-with-trumpets Requiem For The Masses showed off the seven singers, the rest of the 70-plus minute show had more r'n'b-styled numbers written by the band. This set came from a time when the group was dropping off the charts, but still big live, and they were looking for a way to get across the wider range they offered, there were precious few double live albums being released in those days. But alas, the group's choir boy image proved too hard to shake, and even though you could hear them trying to be hip (which they probably were), rock and roll audiences now going to Zeppelin shows weren't buying it.
Posted by Bob Mersereau at 5:56 PM