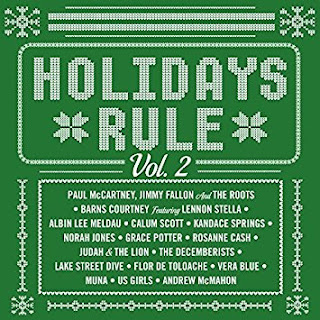 A mix of newcomers and veterans is featured on this set, which is made up of new or very recent recordings, and none of them the same old Christmas tunes you'll find on half the other albums you have in your collection. At least half the songs I've never heard of in any version, and the more familiar ones are done in quite different versions. In short, this will be a new take of Christmas tunes for any of your gatherings.


The biggest winners are from a trio of women in the middle of the disc. Norah Jones offers up a suitably jazzy live version of a Horace Silver song, Peace, which sits nicely as a holiday number, or for any time really. Grace Potter, of all people, does one of those old-fashioned luxurious ballads with clouds full of strings and choirs of angels, which she wrote herself, called Christmas Moon. And Rosanne Cash has finger-snapping fun with an old Louis Jordan number, Make Ev'ry Day Be Christmas.


Other fun ones include Lake Street Dive doing a novelty song, I Want A Hippopotamus For Christmas, an old '50's tune that they do a charming job with. The Decemberists offer up Alex Chilton's surprisingly unironic Jesus Christ, with just a touch of rebellion in a nasty guitar line at the end. And Judah & the Lion do their updated folk on The Christmas Song (that's the "chestnuts roasting" one).


Overall there are nice sounds across the whole set, with some well-chosen new artists, including Flor De Toloache, Vera Blue and Muna, doing Paul McCartney's Pipes of Peace. McCartney himself shows up on that remake of his Wonderful Christmastime, with Jimmy Fallon and The Roots, with The Roots remix welcome, Fallon's pointless inclusion not.
Posted by Bob Mersereau at 2:56 PM