MUSIC REVIEW OF THE DAY: THE ROLLING STONES - ON AIR 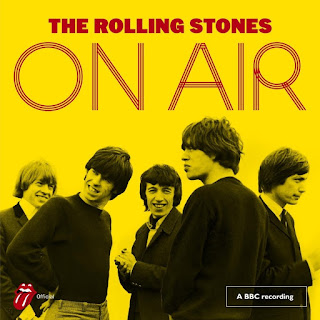 While The Beatles and other have fully mined their many appearances on the BBC, The Stones have been remiss until now, no doubt part of their complicated relationship with their late former manager Allen Klein, whose ABKCO controls much of their '60's material. At last that's been worked out for this set, with exciting results. The big news is a new process at Abbey Road Studio called de-mixing, which basically lets the engineer isolate each instrument, acting like the songs were recorded on modern multi-track equipment, rather than basic mono.

The results are startling, and while The Beatles' BBC tracks often sound flat, especially those sources from transcription discs or home tapes, these tracks are vibrant and in most cases, sound like recent work, rather than songs from 1963-1965. Even the worst-sourced tracks, such as a February 1964 version of I Wanna Be Your Man, have been saved from bootleg status into a decent listen, probably found in some collection taped off the radio over 50 years ago.

That's a great thing, because that track in particular is quite different from the group's released version, and Brian Jones shines on slide guitar with a lick not heard in the original. There are lots of quite different takes, whether live in front of teen studio audiences or re-recordings at the BBC studios. In addition to favourites from the group's early repertoire and the latest singles, there are instances of songs never recorded by the band, such as Beautiful Delilah by Chuck Berry, and Crackin' Up, which was resurrected in 1976 for the Love You Live album. There's also a wealth of obscurities from b-sides, EP's and buried on early albums, including Down The Road Apiece, Mona and 2120 South Michigan Avenue. This is the Stones at their earliest, bluesiest for the most part, but does hit that crucial time when the writing started to flow, and features a somewhat different take of Satisfaction as well as The Last Time.

At 32 tracks spread over two discs, not everything recorded for the BBC is here, as bootleggers have found about 50 cuts, but there's no repetition of songs, and of course, the quality is off-the-scale better. It's funny that more effort seemingly goes into promoting the newest concert DVD or best-of set, largely same-old, same-old, yet here's the goldmine. All you have to do is check out the sizzling version of I Just Want To Make Love To You, in front of a screaming audience at Saturday Club on April 18, 1964. The Beatles were still singing I Want To Hold Your Hand, by comparison.
Posted by Bob Mersereau at 10:08 PM