MUSIC REVIEW OF THE DAY: THE COOPER BROTHERS - RADIO SILENCE 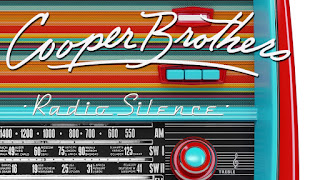 Ottawa's Cooper Brothers have always been about more than the Southern Rock tag they got, having been signed by the famous Capricorn label (Allman Bros, Marshall Tucker Band, etc.) in the '70's. Even though you can still hear a little of that classic twang, the group have all sorts of catchy hooks and choruses through their songs, as well as lots of other surprises. The title cut for instance far more of a soul cut, complete with a sweet and full horn section.

Dick Cooper has been full of new songs ever since the band got active again in 2006, and here fills the whole collection with brand-new material, everything from ballads to blues to rockers. I like the shot at their hometown, kind of a Jack and Diane theme set in the city, called Government Town: "They roll up the sidewalks at sunset/Put up a sign saying 'No fun allowed!'" It's also a really adept band these days, with lots of hands to call on for a big sound, plus specialty licks on pedal steel, banjo, the horns and cello. There's also a Grade-A East Coast guest, the fabulous fiddler and mandolin player Ray Legere, who adds a big presence on several songs, helping give a little more country feel to those cuts. It's old school, but The Cooper Brothers went to the right one.
Posted by Bob Mersereau at 7:41 AM